About Us ⋆ Outloud 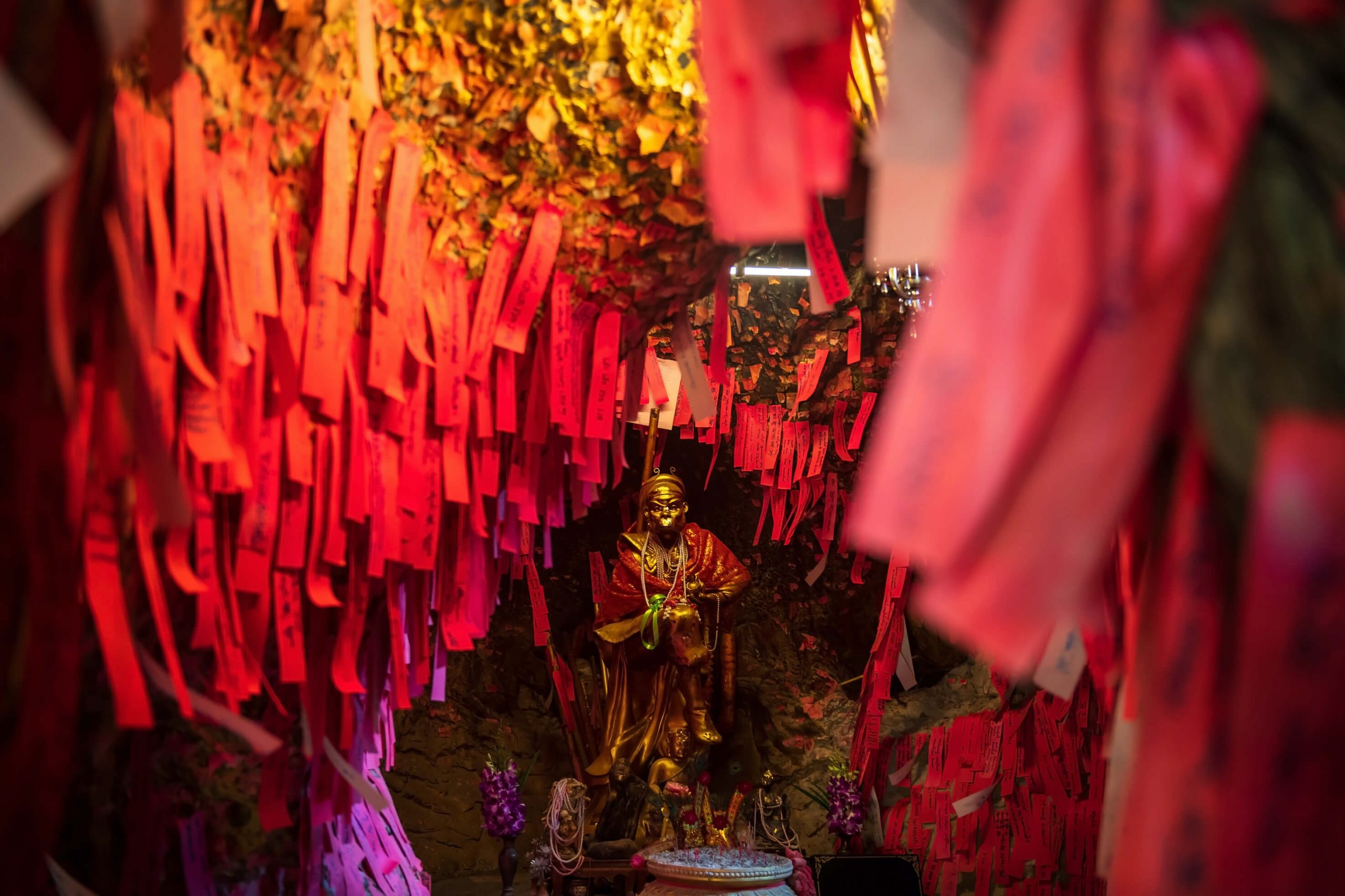 From April to June in 2022, Outloud held ‘About Us’, which was a series of intimate performances and conversations from artists that represented just some of the cultural communities in Western Sydney. Running on select Thursday & Friday evenings, 9 online performances of incredible stories, plays and books were co-curated & performed by the many cultural communities in Western Sydney.

A rehearsed reading and facilitated conversation took place at every show in order for audience members to share their own stories, thoughts and ideas around what the texts said about who we are, what we care about, how COVID has affected our communities here and abroad, and how we could support each other from here on.

In collaboration with WestWords

Transforming Silence is the second anthology from WestWords’ LGBTQIA+ writing group, which includes a collection of poems, short stories, script, and audio work. “I have heard from group members of their silences and that the group has provided a possibility to chip away or dissolve those silences. For some of the group their creative practice was in its infancy, while others had and have a surer footing. Even so, all were challenged. There were missteps, dropouts and creative pieces that were eventually pulled from the jaws of their personal silences.” From the Foreword – Wilfred Roach: Facilitator, LGBTQIA+ Group.

The conversation was primarily focused around how their practice of meeting has changed over COVID, and has been shaped by geographic locations – where they live and where they meet, as their collective spans over all of greater western sydney; how it’s affected who and how they have been showing up, how they’ve been supporting each other.

A collaboration with WestWords, producer and facilitator of the book 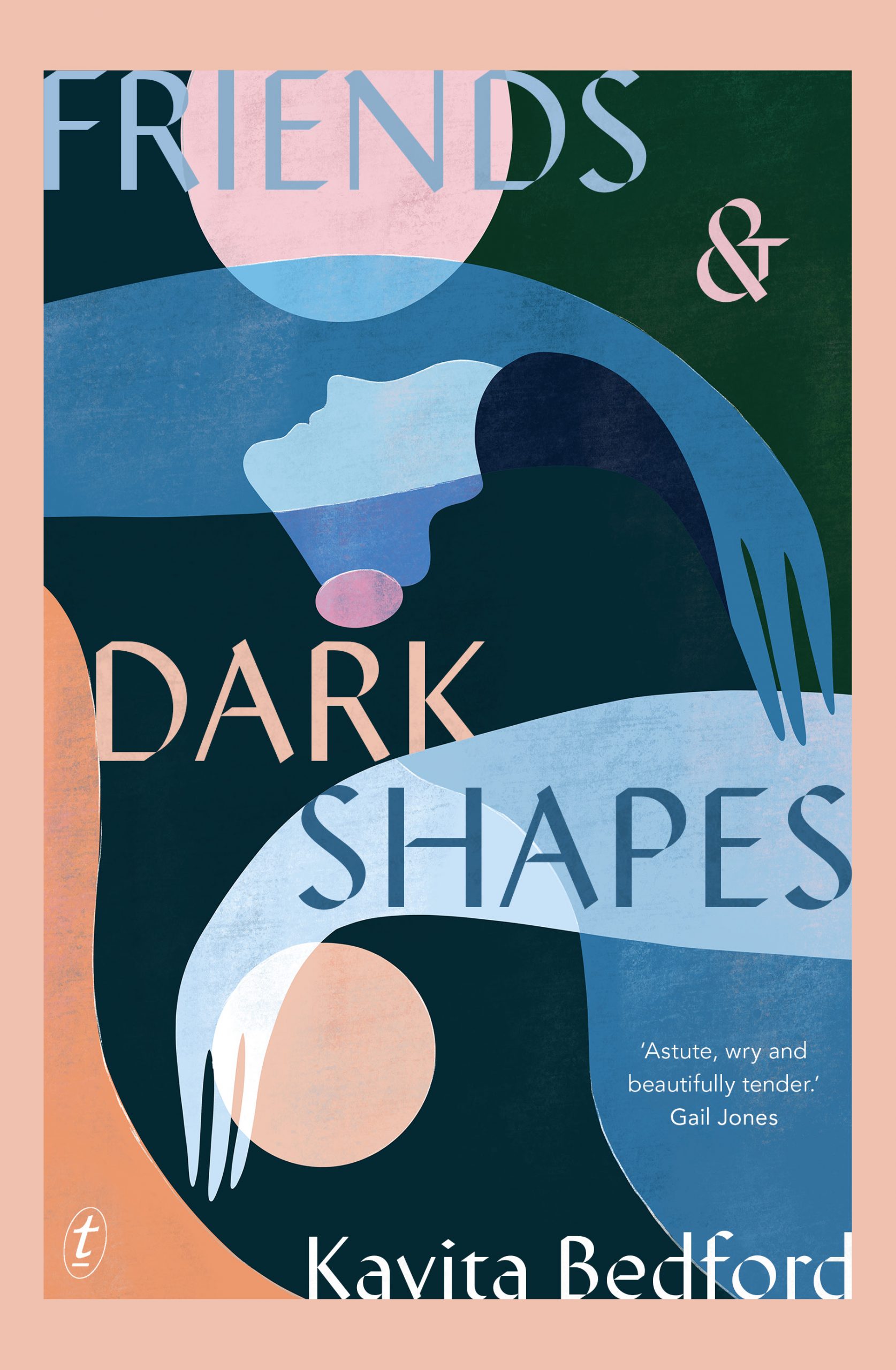 A group of friends move from South-West Sydney into a share house in Redfern. They are all on the cusp of thirty and big life changes, navigating insecure employment and housing, second-generation identity, online dating and social alienation—and one of them, our narrator, has just lost her father. Through emotionally rich vignettes tinged with humour, Friends & Dark Shapes sketches the contours of contemporary life. It is a novel of love and loss, of constancy and change. Most of all, it is about looking for connection in an estranged world. The heartfelt and passionate conversation between author and performers was about the intention and ideas around the work, and the reflections of the performers, who resonated deeply with the experiences of the character they played. There was discussion around the different feelings and histories of the settings in the book, e.g. juxtaposing Bondi with Bankstown 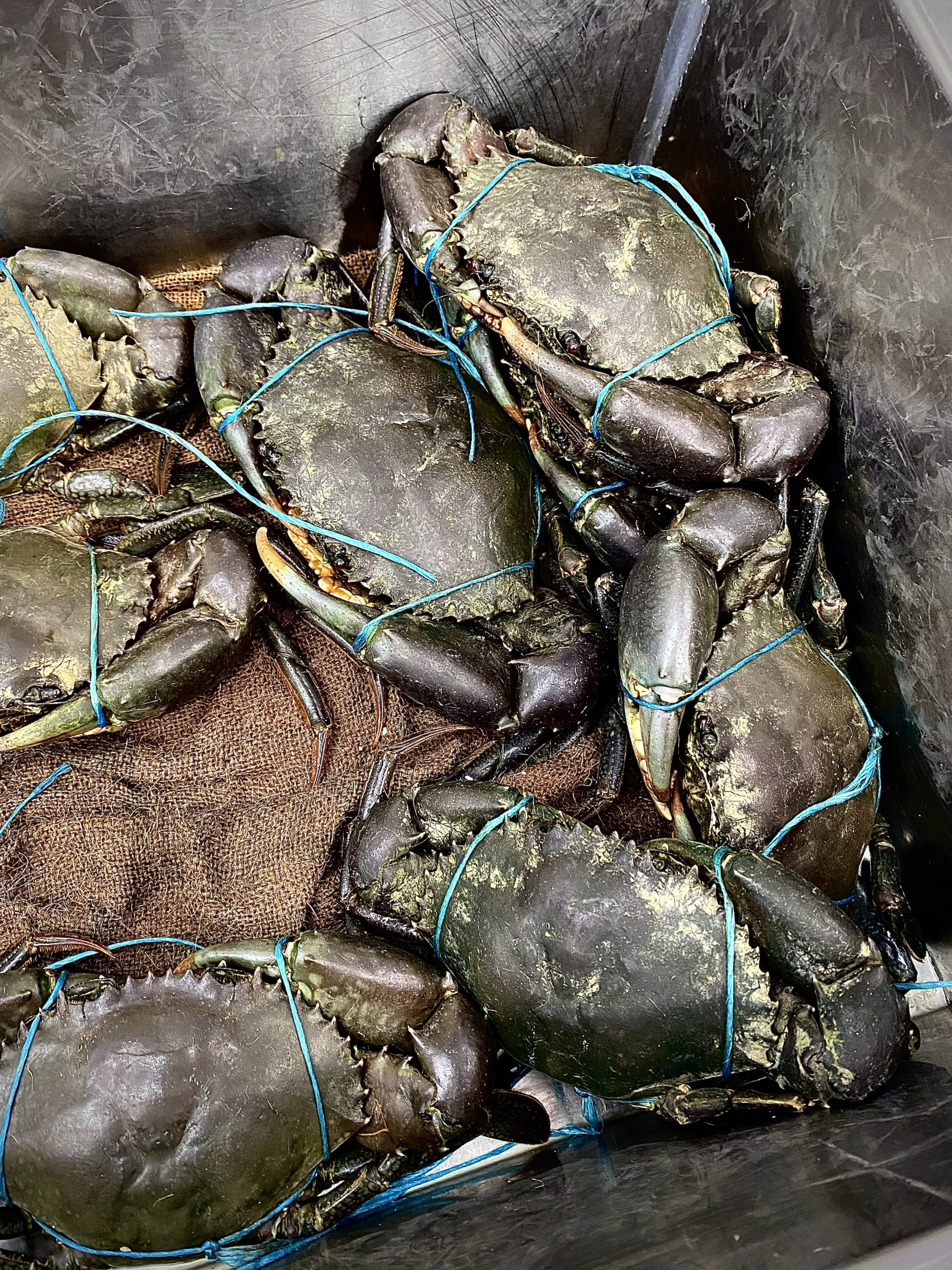 The public premiere reading of Marcus Khoudair’s in-development film. South-west Sydney, late 2018. Floating between primary and high school with his best friend Yvette, twelve-year-old Joseph Chamoun lives for his older brother Charbel’s charisma and the peace he brings to their Lebanese-French-Australian family. When Charbel dies in a car accident and the family’s paternal relationships implode, Joseph vows to replace Charbel. Joseph discovers disturbing truths regarding the death that strains their family and forces a confrontation with the man responsible.

The conversation was insightful, in depth, and was centered around images and situations within the familiar settings of the film script. Family connections, religion and South-west Sydney was the throughline. 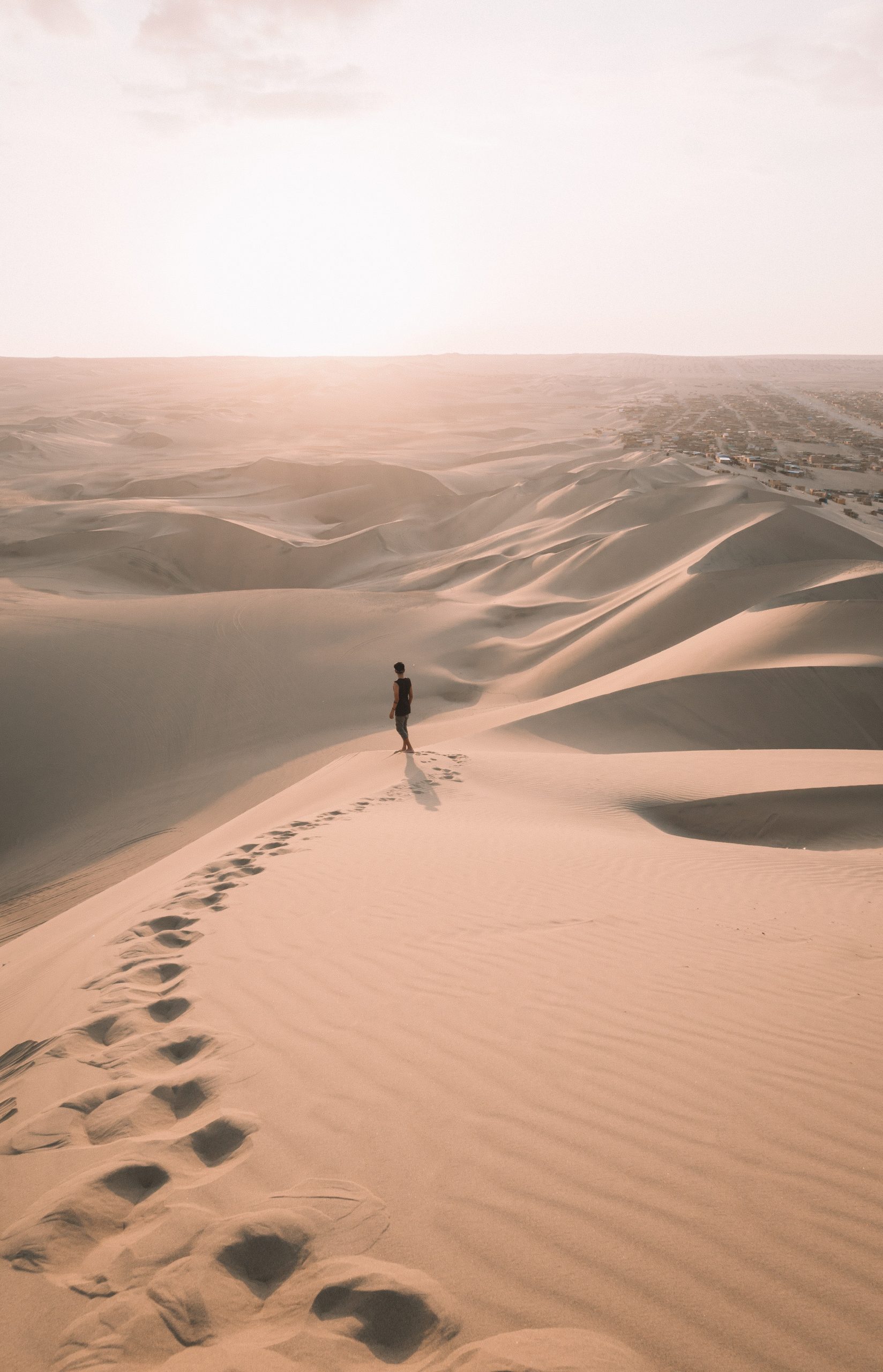 Kenyan playwright Mararo performed and wrote ‘Black Brass’ for the 2021 Perth Festival and Sydney Festival 2022. This reading premiered his latest work. Femi, a Nigerian migrant, becomes entangled in a white Australian family’s grief after the death of their son. An addicted father, and an isolated daughter circle the curious and determined mother who both influences and is impacted by Femi and the coincidences bringing them together. The conversation was an in-depth discussion on character motivations, form and process, and the impact of viewing COVID in your home country while living in Australia. 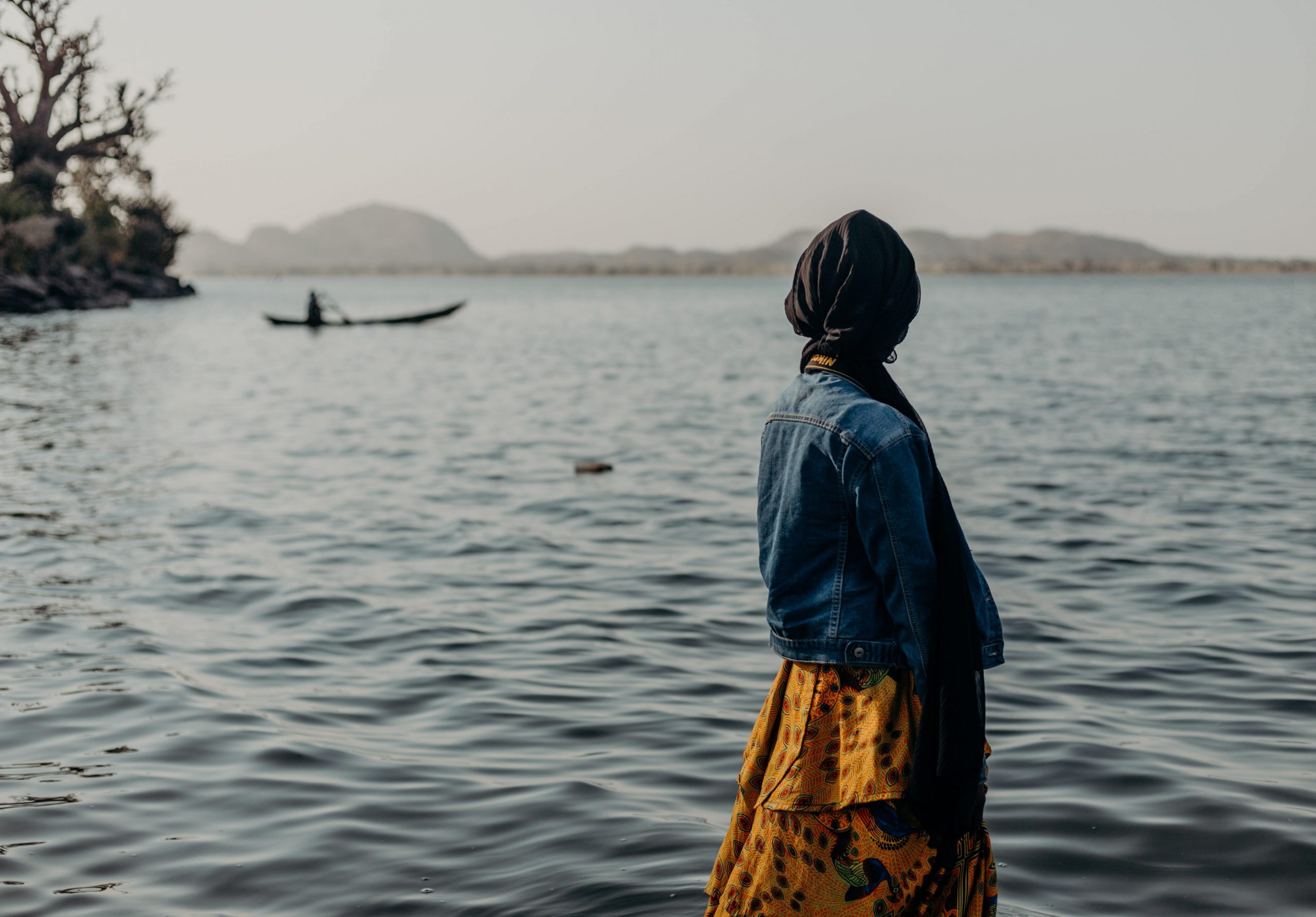 THE HISTORY OF BIAFRA; THE LAND OF THE RISING SUN

Multidisciplinary artist Perpetua Ekechukwu premiered her new work. In this moving and intimate text, Ekechukwu speaks to her Biafran cultural roots, displacement and the lingering impacts of the Nigerian-Biafran War, including her experiences during the war, and what is happening at the moment in her community. The discussion was a structured Q+A with Perpetua and the cast, as well as answering questions about Biafran culture, heritage, traditions and artists from the audience. 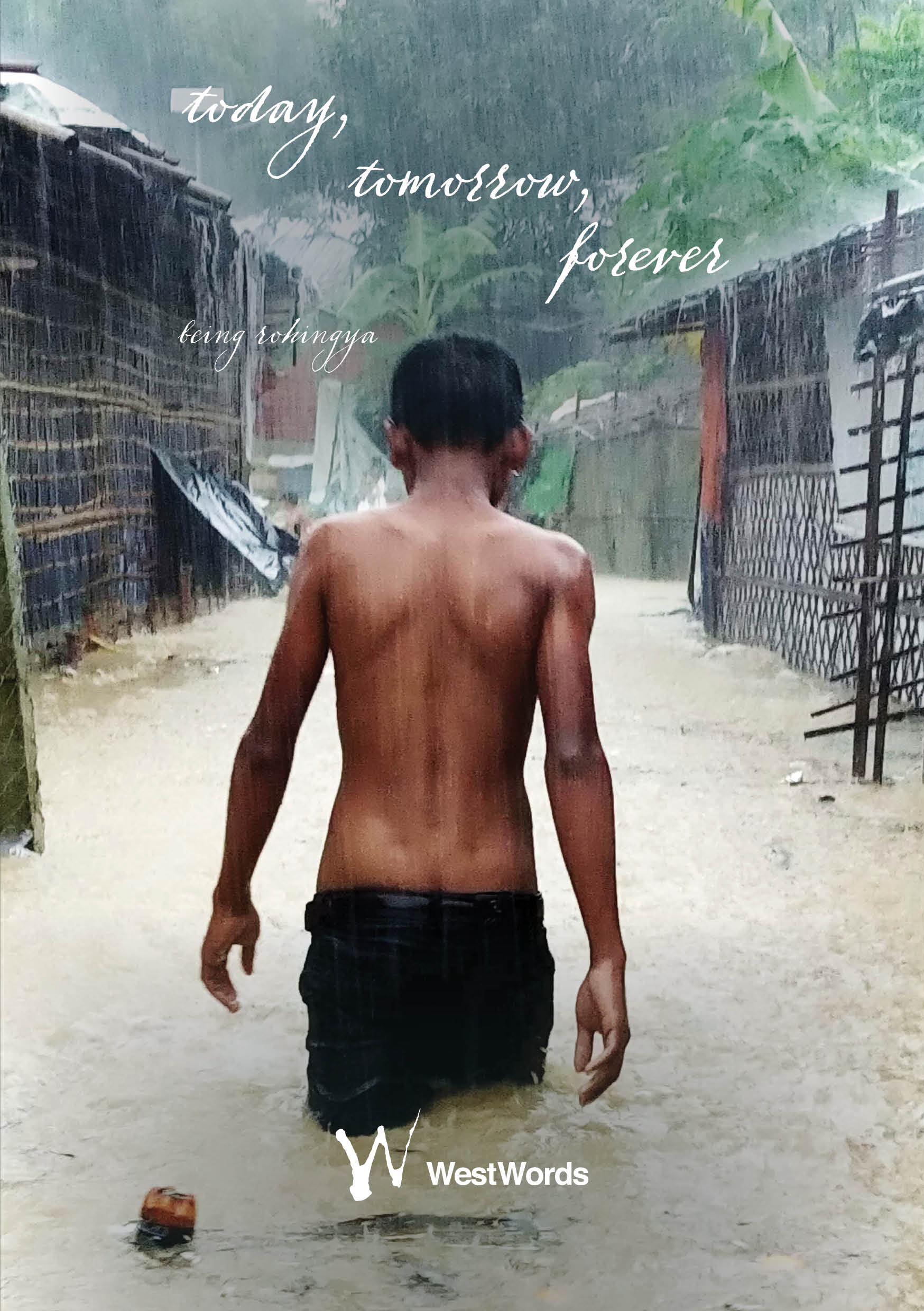 A collaboration with WestWords, developer and publisher of the book.

Pan Sandar Myinit is a young Rohingyan woman living in Canterbury-Bankstown collaborating on a poetry collection with 3 young Rohingyan men living in the world’s largest refugee camps in Coxs Bazaar, Bangladesh. With WestWords support they worked with critically acclaimed poet ali whitelock to produce a powerful collection of poetry and photography to create a nuanced conversation and story of tragedy, hope, resilience and the beauty of the human spirit. “We have faced all kinds of barriers and abuses of our human rights in our relatively short lives. Sometimes the smallest few words can make all the difference. They can comfort. They can inspire. These poems share our experiences of being a part of the Rohingya Diaspora. Stay strong, be brave, love hard and true, and you have nothing to lose.” The intimate, moving and inspiring conversation between the artists was around their histories, lives and achievements, and the process of taking up poetry to help them through their experiences.

A collaboration with WestWords, developer and publisher of the book 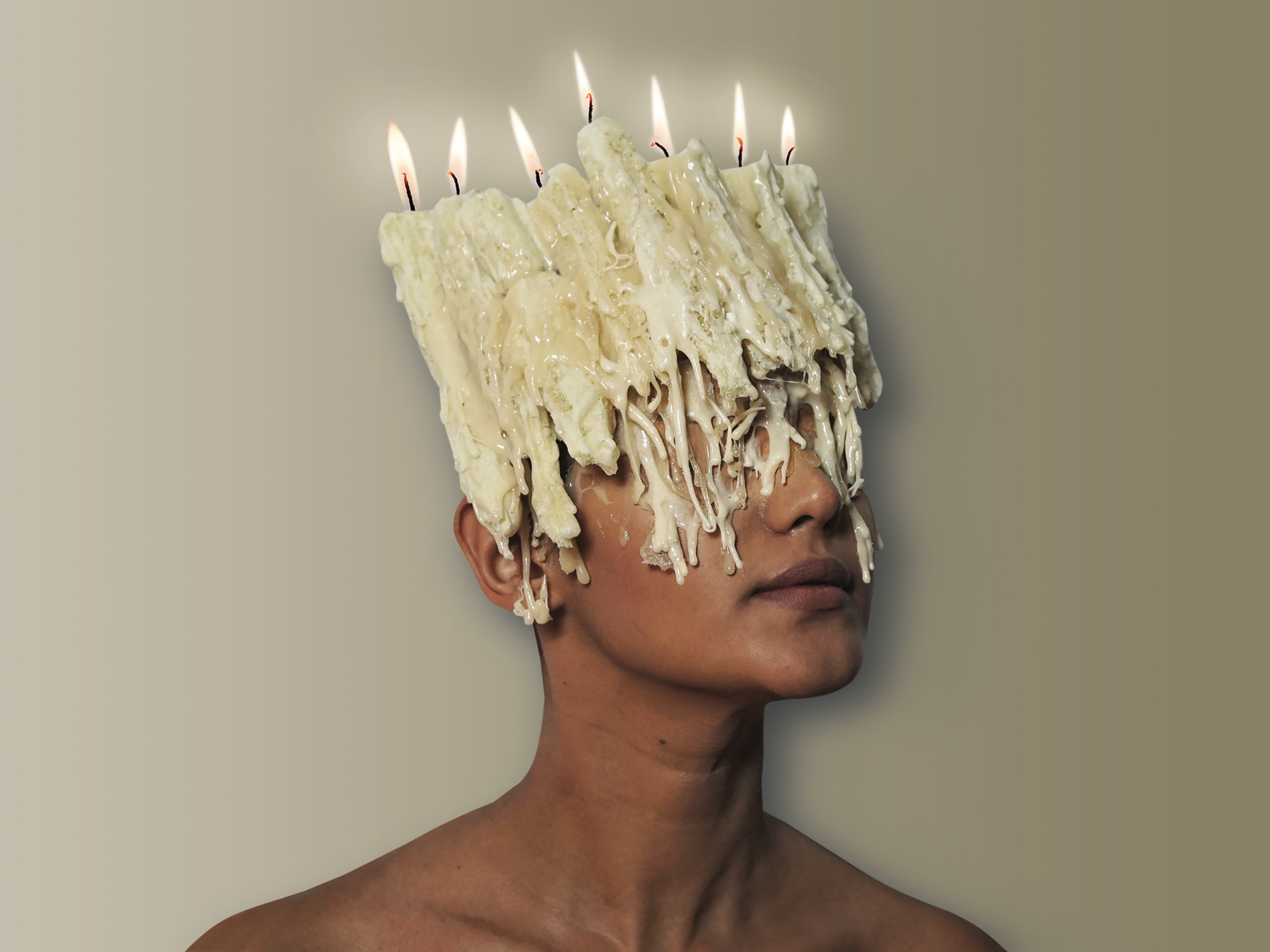 image description: A person in 3/4 profile has a crown of lit candles that has dripped down over their eyes and cheeks, obscuring their face.

James said: “The walls of Troy held strong for 10 years of war. Until that damned wooden horse. Now the Greek victors are dividing the women between their ships, leaving the queen and her royal court for last. This ancient play  finds new resonance in a Persian setting. Iran was one of the hardest hit by COVID, yet this was barely mentioned in the media. The Trojan Women speaks to the plight of the Iranian people and, in particular, the women.” The conversation was very celebratory, as there are not many opportunities to see theatre written and performed in Farsi in Australia. This project had been severely impacted by COVID and postponed several times

An adaptation based on the play by Euripides, retold by Dena Razaghi.
Translated by Gholam Reza Shahbazi. 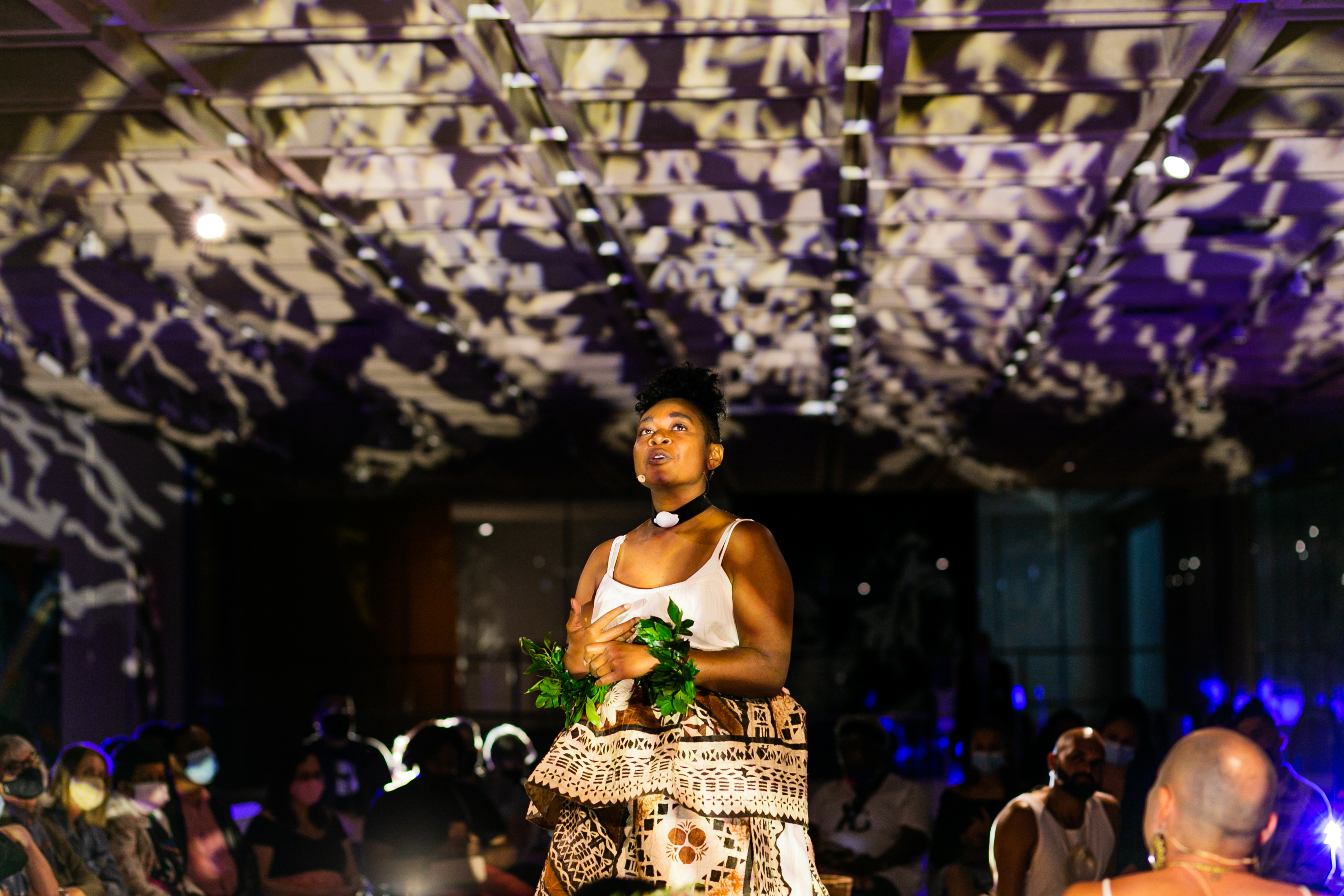 image description: A person, standing, is looking up in a dark room with patterned reflections on the ceiling. They are
surrounded by an audience. They have leaves wrapped around their wrist and are wearing a white singlet and patterned skirt.

Kalaga Atu is a journey across Oceania that transcends time, space and place, calling ancestral wisdom into the lives of five siblings. Each sibling questions their relationship to the bodies they inhabit, the spirits who guide them, and the sand, soil and salt that they love.

Kalaga Atu, meaning ‘to call’ in the Tokelauan language, weaves poetic text and music in a warm performance experience. Written and directed by Tokelauan Fijian storyteller Emele Ugavule, the original performance included lighting design by Amber Silk and choreography by Sāmoan dance artist Xavier Breed, calling upon kinship ties between the people of the Great Ocean.

The conversation was joyful, as the performers and their families spoke about the process of creating the work, and navigating the impacts of COVID on the team

Kalaga Atu was commissioned by the Art Gallery of NSW.

THE ENLIGHTENMENT OF THE SIDDHARTHA GAUTAMA BUDDHA, AND THE ENCOUNTER WITH THE MONKEY KING – GREAT SAGE, EQUAL OF HEAVEN

Written and directed by Joe Lui

Launching with an adaptation of the Monkey King mythology, Enlightenment is the story of The Monkey King and The Buddha… reimagined as two young women in Australia. The most important human being ever born, and the most powerful creature ever to exist. Somewhere in our city, they’re about to hook up. Recommended for ages 16+.

This was a contemporary queer imagining of one of the ‘Four Great Works’ of Chinese literature. Joe said “It opens conversations about the state of people of colour trying to make their way inside of the colonial society that is Australia. About what it is to assimilate and behave, and what it costs us.“ The discussion afterwards was very robust, with many audience members sharing their own stories about their experiences with racism, religion and connection to mythology.

ABOUT THE WORK – Joe says:
“Enlightenment is one of the early chapters of the one of the Four Great Works of Chinese Literature – The Journey to the West. It is a retelling of the story of the Monkey King (of monkey magic fame) breaking into heaven to steal the peaches of immortality for his monkey kin. In the story he causes havoc in heaven and the Buddha Himself has to be summoned to punish him. This play is a contemporary and queer reading of this story. It deals with questions of the police state, about how privilege and systemic oppression causes behavior that is incredibly easy to demonize, and how sometimes love just ain’t enough. I think it opens conversations about the state of people of colour trying to make their way inside of the colonial society that is Australia. About what it is to assimilate and behave, and what it costs us. I also think it is an irreverent, sexy and possibly blasphemous reading of a Chinese cultural property adapted by someone who grew up being steeped in Chinese culture. It is time that we re-appropriate the ancient stories of our cultures toward our modern concerns, instead of preserving them as a-political niceties. I think Enlightenment opens a good conversation about how and why we can or should reimagine these tales.“

CONTENT NOTES: Contains themes of State Violence. There is at one point a threat of sexual violence made. Contains sexual references and some misogynistic language. These will be contextualised as part of the community discussion afterwards. Recommended for ages 16+.

ABOUT THE ARTISTS:
WRITER, DIRECTOR and FACILITATOR: Joe Paradise Lui (he/him/y’all) (@joeparadiselui) is a submerging -nay, drowning- artist and undisputed winner of the 2013 Spirit of the Fringe award. He has won no awards since. Joe Lui is a founding member of Renegade Productions. Within its aegis he creates experimental theatre and performance works. Joe Lui is also a freelance director, writer, and a sound and lighting designer. His most recent professional directing work was Unsung Heroes, with Black Swan State Theatre Company. His most recent independent directing work was Beginning at the End (of Capitalism), presented at the Blue Room Theatre. His most recent design work was The Sum of Us by Yirra Yaakin Theatre Company as part of Perth Festival.

Outloud acknowledges the Darug and Eora nations as the traditional and ongoing custodians of the unceded lands and waters where we work and play. Respect and solidarity to their elders past and present.